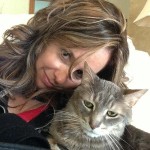 Diane King grew up in Bazetta, Ohio. A rural area in northeastern Ohio. As a little girl, Diane watched as her father would find stray dogs and cats and find homes for them. As this was before internet and social networking, he had to rely on ads in the newspaper and word of mouth. This left quite an impression on Diane, who loved all the animals her father found.

Because of her love of animals, Diane soon was working in a vet’s office where she would bring home animal that were dumped there. She then spent the next 15 years grooming animals before launching her mobile grooming business in 2007. All the while finding good home for homeless dogs and cats.

One day as Diane arrived for a grooming appointment in the pouring rain, she noticed a dog on the front porch. Diane could see the dog looked cold, hungry and scared. When she inquired about the dog, she was told it had been there a week and they were hoping it would just go away. Diane immediately took the dog with her. The vet told her the dog had had many litters of puppies, was heartworm positive and had mammary cancer. The options were to treat the dog or put her down. Because Diane did not have the money to cover the vet expenses, she started taking donations. She realized there were many dogs and cats in this situation – and a rescue was born!!!